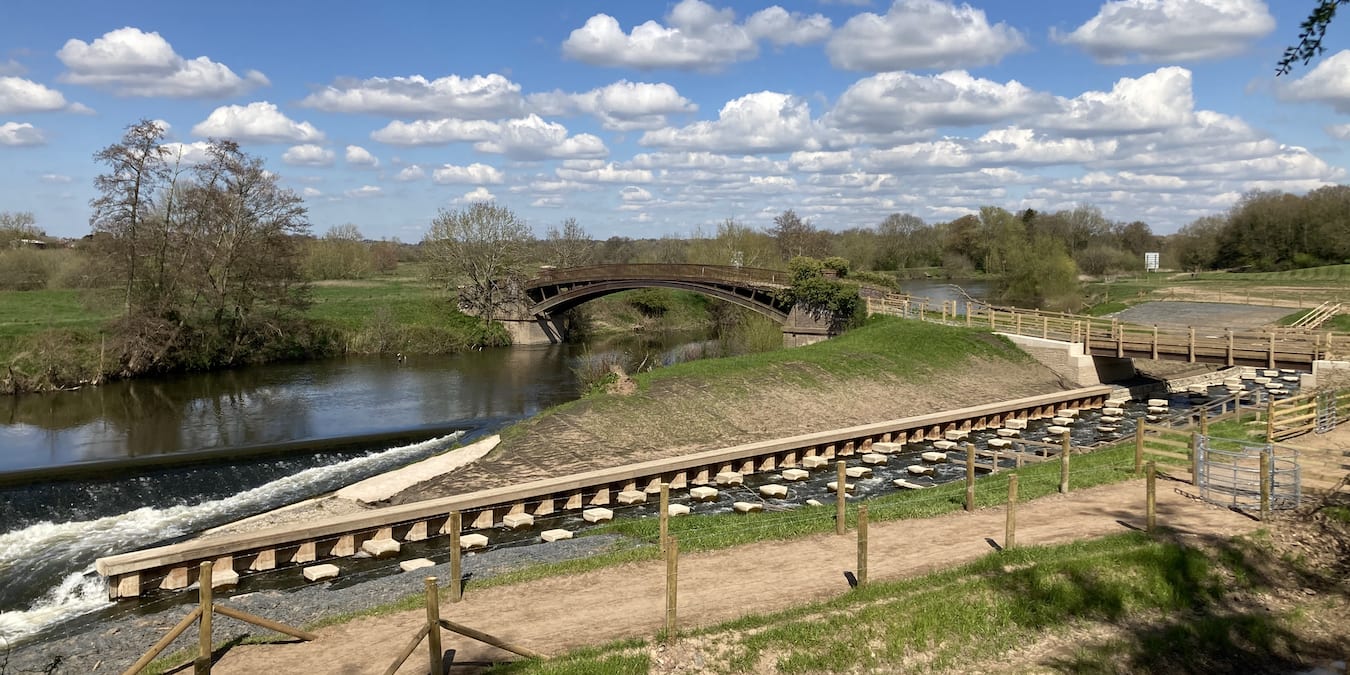 The Northwick Manor Heritage Trail is a circular walk that follows the River Severn to the hamlet of Bevere, just outside the suburbs of north Worcester. Although primarily steeped in medieval history, the trail takes you past historical brickmaking fields and Bevere lock and weir, an important part of the Severn’s industrial navigation infrastructure.

A map of the Northwick Manor Heritage Trail is available here. It details the location of all the information boards, which go into much detail about other eras of history not covered in this guide.

Start at the car park and follow the diagonal path across The Slip through a gate and you’ll see the trail path ahead along the River Severn. This is the site of the Northwick brick pits. Although peaceful and serene today, the landscape was once bustling with the industrial activity of brickmaking.

The river meadows have been exploited for their raw material since medieval times. Clay and sand were dug out by hand and bricks were made within the nearby fields. While little documentary evidence of this important local industry has been found, the surviving landscape tells its own story. You can see this in the scarred field, although it is difficult to see the lumps and bumps when the vegetation is at its height during the summer.

The trail path ahead follows an earthen causeway, which was most likely constructed to allow the transportation of fired bricks by cart from the marshy fields to the lane above.

A small cottage on the riverbank once existed where you are now standing. It was occupied by a family of brick-makers, whose address is described on the 1861 census as ‘Northwick Brickyard’. Edward Knott, who was the head of the household, is recorded as a brick-maker at Northwick in 1841 and was married with six children. His was one of the four brick-making households in Northwick at this time, but by 1861, he had left his wife Eliza a widow and his youngest son Edwin, then the brickworks manager. Edwin was the last in the family to continue that tradition [1].

Continue along the river and you will reach Edmund’s meadow, which is carpeted with buttercups in the summer months.

You may also be lucky enough to see horses in the meadow, take care not to approach or feed them.

Continue on the trail path through more gates and fields until you reach Bevere lock and weir. It was constructed to improve the depth of the Severn for larger boats laden with commercial goods to navigate upriver. Unfortunately, you cannot get a closer view of the lock from this side.

Head past the weir and you will arrive at Bevere Island, which is connected to the riverbank via Bevere Bridge. The island was historically used as a refuge for the citizens of Worcester during times of attack and plague. Bevere Bridge is a delightful cast iron structure that is in desperate need of repair.

In the foreground is the new fish pass constructed as part of the Unlocking The Severn project. The columns that look like steppingstones break up the flow of the river into varying velocities, which allows native and migratory species of fish of all sizes to swim upriver because they are unable to cross over the weir.

Bevere Bridge is not open at the moment and there is not much to see on Bevere Island. Keep going until you reach a stile and then the trail follows a gravel road to the right. Head up the hill around a wall and then you will end up on a road that takes you round to Bevere Green. This leafy area contains beautiful Georgian mansions and is one of the most desirable addresses in Worcester.

Head south past the Bevere Green and you will end up on Northwick Road. Follow the road and you’ll end up at Northwick Green. Turn right onto Old Northwick Lane and you will see Northwick House on the left before the road bends. This is the former home of the Knapp family, who owned the land and Northwick Brickyard, where Edward Knott worked. Although buildings existed here in 1751, the house you see today was greatly improved and largely rebuilt by Joseph Knapp in the 1830s and he would have presumably used bricks from his own kilns at the brickyard [1].

Continue down Old Northwick Lane past the stables and onto a gravel road that will lead you back to The Slip car park where you started the trail.

The trail information boards detail a wealth of history, mainly medieval because Northwick manor, also called Northwick Palace, was originally owned by the Bishop of Worcester. This site only details industrial history; therefore, we have focused the brickmaking heritage of trail plus the navigational infrastructure at Bevere.

This curious little bridge connects Bevere Island with the east riverbank of the Severn next to Bevere Lock and Weir. It was most likely completed by the Severn Commission workmen who were constructing the locks and weir on the other side of the island in 1845.

The bridge was compensation to the landowner, Mr Broughton, who had lost land due to the navigation works. The bridge cost the Commission £2,000 (£248,700 in 2020) and was most likely floated down the river on a raft. This event suggests the bridge was created by a foundry in Shropshire; however, we do not have any information about the manufacturer.

The cambered railings have interlaced round heads and a diaper frieze at the base.

Where the railings meet the brick abutments, they are continued as walls with stone copings, splayed and terminating in square piers with pyramidal cappings [2].