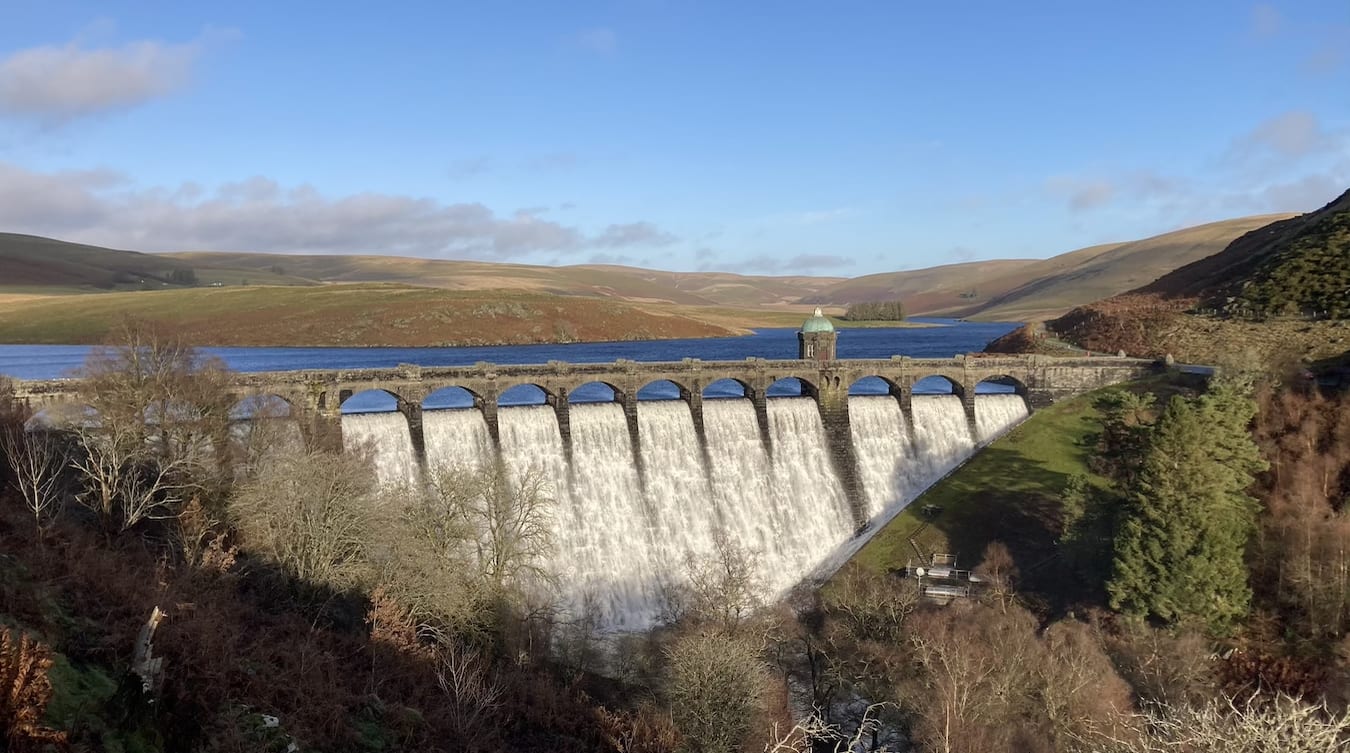 The Elan Valley contains multiple reservoirs and dams that were constructed to supply the city of Birmingham with fresh running water. The valley is a biodiverse haven for walking, cycling, birdwatching, wildlife discovery, stargazing and geology. It is one of the most impressive landscapes in the UK and is thoroughly recommended by the Industrial Tour as a must-see attraction.

The Elan Valley estate contains many trails for walking, cycling, and horse riding; however, this guide will focus on visiting the dams and reservoirs due to their status as industrial heritage attractions.

You can see the dams and reservoirs in any sequence; however, this guide will recommend them in the following order:

The following map details all car parks, dam locations, and additional points of interest including our favourite picnic spot.

The dams and reservoirs

The Caban Coch (Welsh for ‘Red Cabin’) is the lowest out of all the dams. It was constructed to hold back water, which is used to balance the River Wye via the Elan River, which is a tributary. Therefore, the water in the Caban Coch reservoir is not used for the supply to Birmingham [2].

27 million gallons of water joins the River Wye daily. Before the water reaches the river, it passes through two powerhouses, one on each bank of the Elan River. They contain hydro-electric turbines, which provides power for the Elan waterworks [1].

This Garreg-Ddu reservoir (Welsh for ‘White Rock’) is where water enters the Elan Valley Aqueduct via the Foel Tower, which directs it to filter beds before journeying on to Birmingham. The chief engineer James Mansergh realised water would be a problem in the summer months [2]. If the level dropped too low, water would not be able to enter the tower and so the Garreg-Ddu Dam was constructed to maintain a minimum water level of 40 feet below the top level.

As a result, the dam is submerged when the water rises above. This is the reason why such a tall viaduct was constructed on top of the dam. The entire structure can be seen when the reservoir is low as shown in this photo.

In times of low water during the summer, the reservoir can be topped up from the Pen-y-Garreg and Craig Goch reservoirs upstream. There is also a tunnel next to the Dol-y-Mynach dam that directs water from the Claerwen Valley into the Garreg-Ddu [1].

This dam is named after the nearby Pen-y-Garreg farm (Welsh for ‘Above the Stone’), which lost some of its lands to the reservoir after initial flooding [1]. The dam is unique in that its valve tower is located in the centre.

Craig Goch (Welsh for ‘Red Rock’) is the highest reservoir in the Elan Valley. The curved dam is arguably the most beautiful and it featured in the Welsh police detective drama Hinterland.

The Doly-y-Mynach is the first of three dams that were proposed by the chief engineer James Mansergh as the second phase of his Elan Valley development plan. He proposed the damming of the Claerwen Valley to expand the supply of water to meet the predicted growth of consumers.

The dam’s foundations had to be constructed before it was prone to be submerged by the flooding of the Caban Coch reservoir. The Doly-y-Mynach was due to be completed following the completion of the Elan Valley reservoir; however, it never came to pass. Today, the dam remains as it was left in 1904 and it is referred to as the ‘unfinished dam’.

The Claerwen dam was the eventual solution to the second phase of development proposed by the Elan Valley chief engineer James Mansergh. He originally proposed a series of three dams be constructed along the Claerwen Valley following the completion of the initial three dams in the Elan Valley [1]. The unfinished Dol-y-Mynach dam is the only legacy of this proposed second phase.

The second phase never materialised, and the Claerwen River ran unobstructed until fresh concerns over the supply of water were raised following a severe drought in 1937. By 1939, proposals had been submitted to replace the original three dams with one larger dam, an option made possible due to advances in civil engineering and technology. Construction was halted due to production constraints as a result of World War Two, and the dam was finally opened in 1952 by Queen Elizabeth II as one of her first official appearances as the new British monarch [3].

The dam was famously climbed by Richard Hammond in a classic Land Rover on Top Gear.

This tower controls the flow of water into the Foel Tunnel, which leads to the nearby treatment works before entering the Elan Aqueduct on its journey to Birmingham. The tower is a Grade II* listed structure and contains a 300 kilowatt hydroelectric turbine.