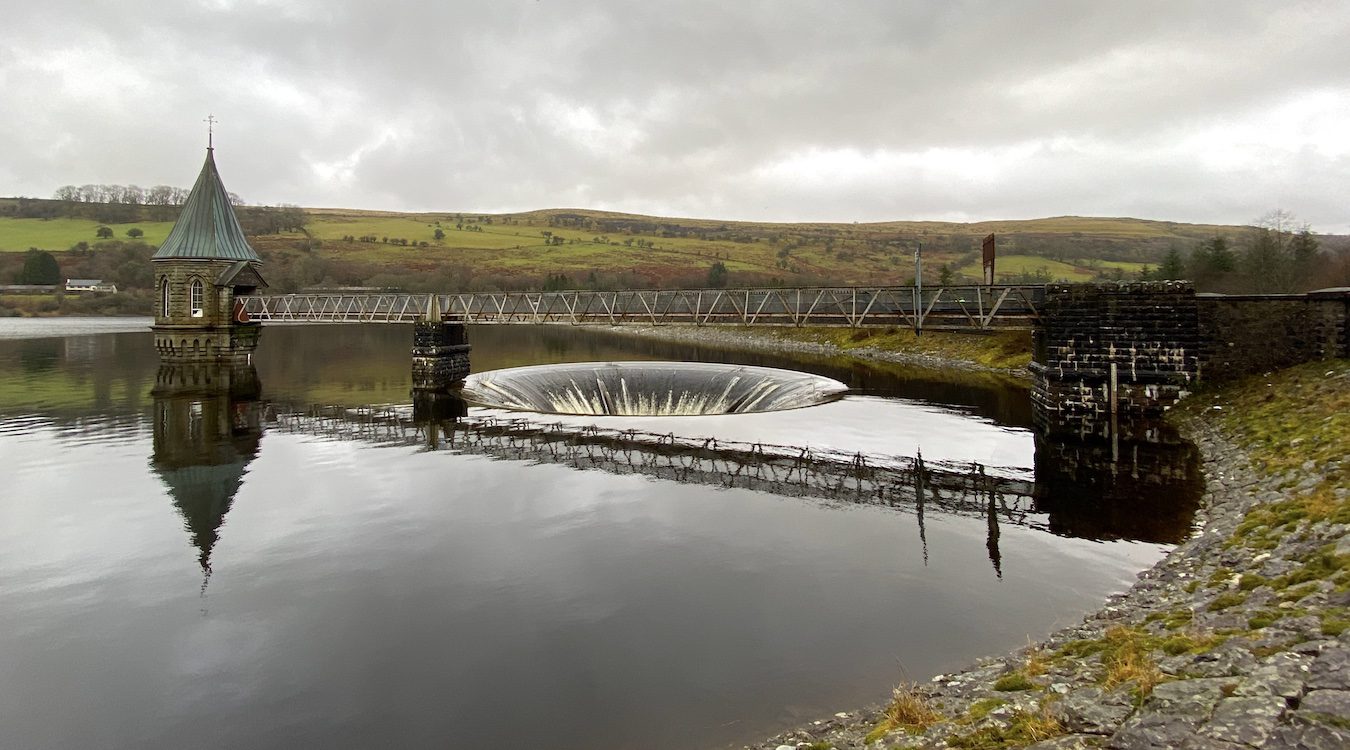 The Pontsticill Reservoir, also known as the Taf Fechan Reservoir is situated in the Brecon Beacons. It contains a bell-mouth overflow, which resembles a giant plughole. Watching water flow down this funnel is very hypnotic and the peaceful Taf Fechan Valley offers visitors wonderful opportunities to explore.

1863 – The Pen-twyn Reservoir (also called the Dol-y-Gaer Reservoir) is completed. After some years, a persistent leak was discovered because the embankment was constructed across a geological fault despite the consulting engineer being the eminent Thomas Hawkesley. This is the reason why the Ponsticill Reservoir was proposed to impound the leakage.

1911 – An Act of Parliament is passed granting the Merthyr Corporation to let a contract out to Sir Robert McAlpine & Sons for the construction of a reservoir using an earth embankment at a cost of £232,000 (£28 million in 2020).

1913 – Repairs were carried out on the Pen-twyn Reservoir, which reduced the daily loss of water leakage from 11 million gallons to 2 million.

1917 – Construction starts on the Ponsticill Reservoir, which included the construction of a 3ft narrow gauge railway to assist with the movement of labour and materials; however, the outbreak of the First World War halted all work.

1922 – Work resumes after a new Act was passed the previous year. The reservoir became known as the ‘Taf Fechan Reservoir’ after the formation of the Taf Fechan Water Supply Board, which embraced several other local water boards. Tom Powell, a workman, is killed after a clay wagon became detached from its rope. Safety chains were installed after this tragedy.

1923 – Various temporary buildings used for the construction project are demolished and replaced with new structures. The workshops were situated below the dam site near the outlet from the tunnel under the dam.

1926 – Work is temporarily halted in May due to the General Strike.

1927 – The reservoir is completed and opened on 21st July with 450 guests in attendance. It is of interest to note parts of the Merthyr Tramroad were discovered when excavating the associated pipeline near Abercynon. The find included 3ft long cast iron plates still attached to their stone sleeper blocks. The Board presented the rails to the Merthyr Tydfil Museum at Cyfarthfa Castle and the National Museum of Wales at Cardiff. A pipeline is also laid to Cardiff [2].

The dam has a clay core and earth bund construction with pitched stone revetment to the inner face of the embankment. The full-length stone wall above has an inner face of sloping earth bank and a low stone wall supporting the roadway above.

The valve tower was constructed using rock-faced coursed stone with a copper-sheet spire. Its gothic style octagonal tower rises from the water on an octagonal base. The lower masonry is corbelled out on stepped corbels with pointed arches between. The tower has narrow lancets on other sides with stone voussoirs and hoodmoulds, plus stepped eaves. The tall octagonal roof has two pitches, clad in copper sheet with iron vane.

The steel lattice bridge runs from the west side of the reservoir to the abutment at the valve tower door and is carried by one stone pier with blockwork above.

The abutment on land has walls of rock-faced stone. The outflow is a convex-sided large funnel in the reservoir below the bridge with concrete ribs and lining of brick or stone [1].