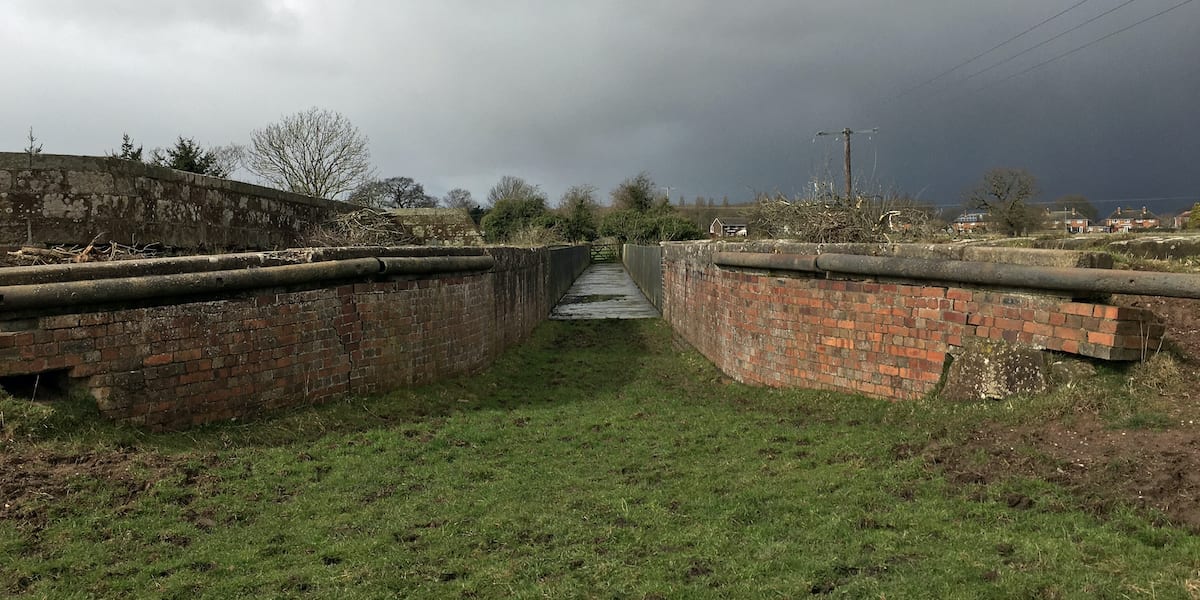 This structure is the oldest surviving iron aqueduct in the world that was navigable. It once carried the Shrewsbury Canal over the River Tern. You can walk in the trough because the canal no longer exists. It is an early example of cast iron civil engineering delivered by Thomas Telford who would go on to to use this material as a staple for some of his most famous works.

1793 – A parliamentary Act is obtained to build the Shrewsbury Canal; a 17-mile stretch that connects the Shropshire Union Canal with the town to deliver cheaper coal.

1793 – Work begins on the canal. The engineer Josiah Clowes begins constructing a stone arched aqueduct to carry the canal over the River Tern.

1795 – Clowes dies then shortly after, an abnormal flood washes away his aqueduct whilst it was still under construction. He is replaced by Thomas Telford who is ordered to rebuild the aqueduct using cast iron by Messrs. William Reynolds & Company at a cost not exceeding £2,000 (£246,000 in 2020) [1].

1796 – The aqueduct is completed; it consists of a cast iron trough whilst retaining the stone abutments that remained from the original structure built by Clowes. The trough weighs a lot less than a conventional stone aqueduct; therefore, it can be carried on fewer supports and does not require puddling (the process of making watertight with clay). A lot less material was required, so the aqueduct was cheaper and constructed faster [2].

1899 – After nearly three decades of declining trade, the canal between Shrewsbury and Eyton was considered for closure due to the bad state of the Longdon-on-Tern Aqueduct. The line was kept open, possibly due to the legal problems involved with closure.

1944 – The canal is abandoned after a continual decline in trade [1]. The line is eventually dewatered, and the embankment is levelled.

Who came up with the idea of using cast iron?

There is some confusion as to who came up with the idea of using cast iron for the aqueduct. Telford writes in Plymley’s Shropshire that it was first suggested by Thomas Eyton, the chairman of the canal’s committee [1]. On the other hand, Telford writes in a letter “I have just recommended an aqueduct of iron, and it will be executed under my direction”. In the same account, he says “I believe this to be the first aqueduct for the purposes of a navigable canal, which has ever been composed with this metal.” [4], Telford was mistaken.

The first iron aqueduct in the world was completed a month before Telford’s at Longdon-on-Tern. The Holmes Aqueduct on the Derby Canal was built using cast iron and designed by Benjamin Outram. Outram had been a partner in the ironworks of William Jessop, one of the most prominent canal engineers at the time, who was the man that Telford worked with on the Ellesmere Canal, which was being constructed at the same time as the Shrewsbury Canal.

Telford was surrounded by ironmasters in a county that had built up a reputation for innovation in iron production. He had also completed the second iron bridge in the world at Buildwas the previous year. It’s probable that the idea to use cast iron at Longdon was a product of Telford’s environment. It is worth noting that the iron for the aqueduct was supplied by Ketley Ironworks, which was owned by William Reynolds, the director of the Shrewsbury Canal Company. Reynold’s cousin was Abraham Darby III, who built The Iron Bridge in 1779 [1]. All the dots start to connect.

You can see how Telford started to develop the experience he acquired training as a stonemason with the knowledge he picked up in Shropshire. He would go on to design impressive cast iron civil engineering projects such as the Engine Arm Aqueduct, Mythe Bridge, Galton Bridge, and the world-famous Pontcysyllte Aqueduct. One could say Telford used the Longdon-on-Tern Aqueduct as a proving ground for using cast iron as a principal construction material.

The Longdon-on-Tern Aqueduct consists of an iron trough, square in section, supported on iron uprights with diagonal bracing. Along the south side of the trough is a towpath with plain iron railings. Sandstone and brick abutments are located at each end with round arches through, the east abutment has corner buttresses [3].

How long is the Longdon-on-Tern Aqueduct?