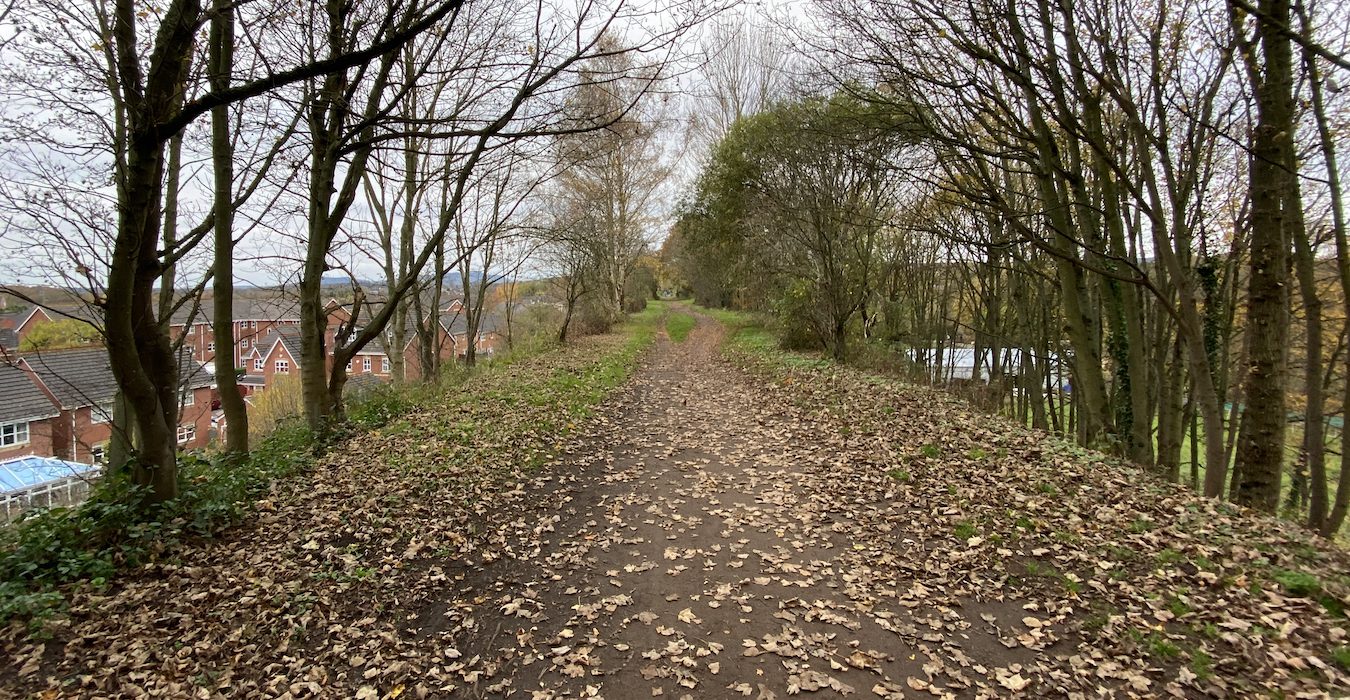 The Leapgate Old Railway is a section of the original Severn Valley Railway that now functions as a walking and cycling route between Stourport and Hartlebury. It follows the top of a vast embankment, which is lined with oak trees and features original red sandstone viaducts.

Start at the car park and head northeast past the gazebo, which marks the centre of the old colliery yard. Head You can start the walk from either end of the railway trackbed; however, this guide will start from Stourport.

Start from the railway bridge over the Staffordshire & Worcestershire Canal where Longboat Lane terminates. A staircase leads up to the walk from the canal.

Walk east and you will start to notice the occasional relic from the railway’s past.

You will then arrive at what used to be the Stourport Power Station junction, the line veering off to the right is where coal trains would travel down. We detail more about this branch later.

Continue walking until you head along the viaduct over Timber Lane. The embankment is very steep, do not attempt to climb down if you want to get a decent view of the viaduct. We drove around to take the following photo.

As you continue along the railway, you will start to appreciate the sheer beauty of this walk, especially if it’s autumn. We were particularly surprised at the number of oak trees that line the route.

Your next stop is the viaduct, which carries the railway over the River Stour. This is a perfect spot for panoramic views of the Worcestershire countryside; you can see the Malverns in the distance.

There is a path down the embankment that leads onto the car park of The Rock Tavern. This is where you can get a good view of the viaduct and its red sandstone blocks.

To the right of the aqueduct is the bridge that carries the railway over Wilden Lane.

Head back up to the trackbed and continue your journey across the bridge. Can you spot the rusted warning sign? Another railway relic.

You are now approaching a vast cutting, which reveals a red sandstone face. Much of the spoil excavated from this cutting would have been used to create the railway embankment. Continue your journey and you will spot the Wilden Top Road bridge in the distance.

The north abutment has been reinforced with blue engineering brick, possibly due to erosion of the sandstone caused by water.

The next point of interest is an accommodation bridge, which most likely would have been used for farm equipment or livestock to cross the railway.

You will then reach the Charlton Lane bridge.

This point of the line is particularly beautiful as you venture through a tunnel of trees.

The line eventually halts at the A449. A path to the left leads down to the road through a gate, where you can get a view of the surviving abutments that once carried the railway.

As you turn around to head back to the start, notice the concrete fence posts with rusted wire, another railway relic.

History of the Leapgate Old Railway

It’s important to note that the Leapgate Old Railway is a section of the original Severn Valley Railway line. It is referred to by its new name to avoid confusion with the heritage line that operates between Kidderminster and Bridgnorth; therefore, the history below is a summarised chronology of this particular section of the Severn Valley Railway.

1858 – Construction of the Severn Valley Railway commences, the contract is awarded to Peto, Brassey and Betts. The contract stated that the railway was to be constructed as a single line; however, cuttings and embankments were to be 30ft wide at formation level to accommodate a double track. Almost all bridges were also built to double track capacity as part of the strategy to defer additional expenses until a sufficient level of traffic justified upgrading the line to a double track.

1862 – The Railway opens with passenger services operated by the West Midland Railway starting on 1st February.

1863 – The West Midland Railway is taken over by the Great Western Railway (GWR).

1918 – Authorisation for the construction of Stourport Power Station is granted, which includes a branch railway along an embankment joining the Severn Valley Railway 440 yards (400 m) east of the Stourport Railway Station. The railway was not built when construction started on the power station.

1927 – Stourport Power Station A opens, coal is delivered initially via the River Severn or the Staffordshire & Worcestershire Canal.

1941 – The Ministry of Food opened an emergency food storage depot near Stourport with a rail siding [2]. Stourport saw many ambulance trains because the US Army had a hospital in the town [3].

1948 – The Severn Valley Railway is nationalised, and ownership is transferred to British Railways.

1962 – A proposal to close the line between Shrewsbury and Bewdley is submitted, which includes the restriction of passenger services between Bewdley and Hartlebury. The Kidderminster Trades Council protests the closures [6].

1963 – The Severn Valley Railway is also included in the British Railway Board’s report ‘The Reshaping of British Railways’, which is commonly known as ‘The Beeching Report’ [6]. The closures proposed the preceding year come into effect [7] and were most definitely backed up by data in this report. The remaining section of line was then unofficially referred to as the ‘Stourport branch’.

1970 – All remaining passenger services between Bewdley and Hartlebury on the Stourport branch are withdrawn [8]. Coal trains for the power station continue to use the line.

1979 – Coal trains for the power station are withdrawn as supply switches to road haulage [9].

1984 – Stourport Power Station A is demolished, and B closes.