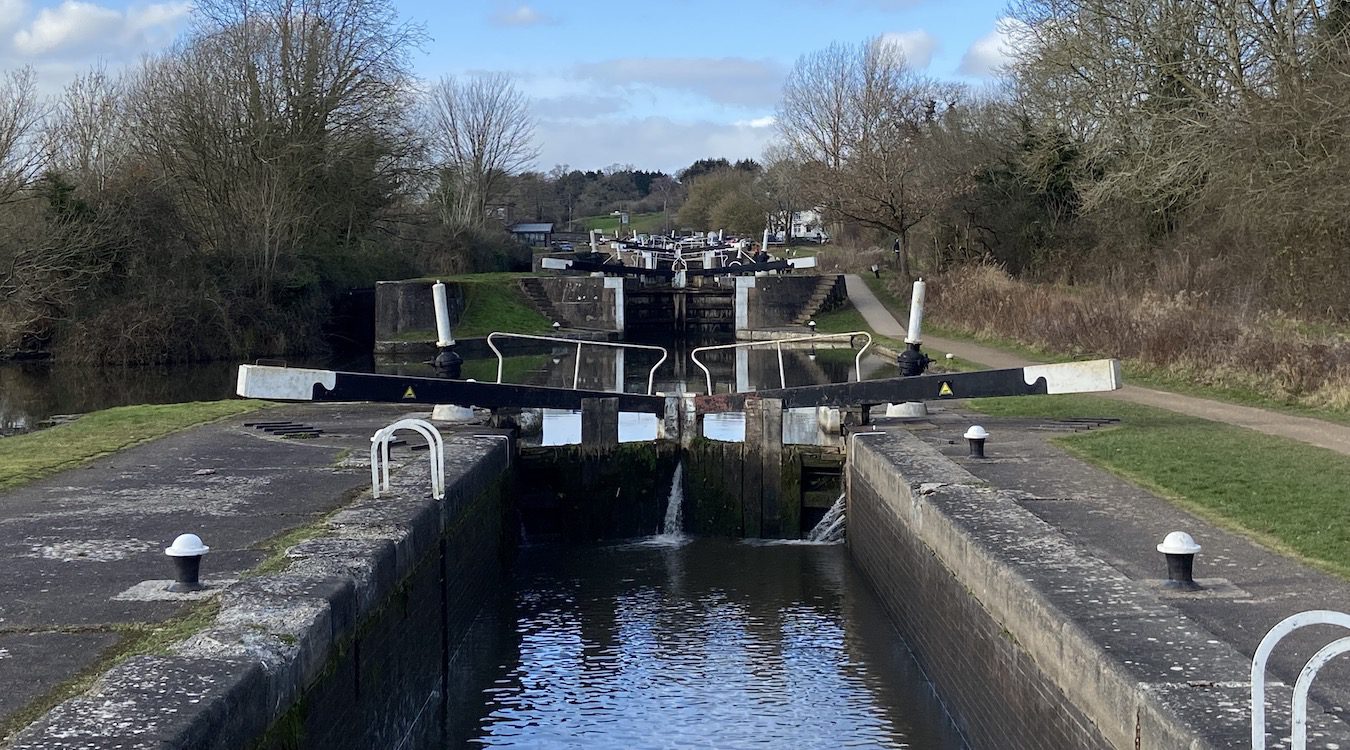 Hatton Locks is a flight of 21 locks near Warwick. Completed in the 1930s, the locks are a late addition to the canal network, which had experienced many years of declining tolls by this point. Today, the locks are a great location for a walk or exploring Warwick and its countryside.

1793 – An Act of Parliament authorises the construction of the Warwick & Birmingham Canal. The route starts from the Digbeth Branch and requires 21 locks at Hatton to drop the canal, which originally terminated at Saltisford Wharf, just outside of Warwick town centre.

1796 – The number of employed men on the construction of the canal had to be reduced whilst arrears were chased.

1798 – Concerns over the money required to finish the canal were eased with the issue of new shares and loans under the new target to open the Warwick & Birmingham Canal simultaneously with the Warwick & Napton branch, which would link the former with the Oxford Canal.

1800 – Both canals including the Hatton Locks open for trade.

1839 – The Warwick & Birmingham Canal Company pays its highest dividend of 18% in the same year that the London & Birmingham Railway opens. Seven years later, the dividend drops to 3% highlighting just how much competition the canals faced from the growing railway network.

1925 – The Grand Junction and Regents Canal companies start discussing the proposal of merging and amalgamating other lines between Birmingham and London to create one unified route amidst years of declining tolls. A special committee to consider a purchase or merge with the Warwick & Birmingham Canal.

1929 – The Warwick & Birmingham Canal including the Hatton Locks become part of the Grand Union Canal. The new company intended to encourage the use of 12 ft 6 in wide barges and so a plan on widening the canal including its locks was proposed.

1934 – The Hatton Locks are converted into weirs and a new wider flight is constructed adjacent to their original counterparts [1].

1948 – The UK’s transport infrastructure is nationalised, and control of the canal and locks is passed to the newly formed British Transport Commission, who also become responsible for all inland waterways [2].

1963 – The British Transport Commission (BTC) is abolished, and control of the canal and locks passes again to British Waterways, a statutory corporation wholly owned by the government that took ownership of all inland waterways [3].

1987 – The top lock keeper’s cottage is first designated as a listed structure [4].

2012 – The Canal & River Trust is formed and take control of all inland waterways in England and Wales from British Waterways [6].

How many locks are on the Hatton flight?

How long is Hatton Locks?

How long does it take for a narrowboat to pass through Hatton Locks?

We spoke to a boater. They said it took them between 4 and 6 hours to pass through Hatton Locks depending on traffic. Less experienced boaters naturally, would take longer.