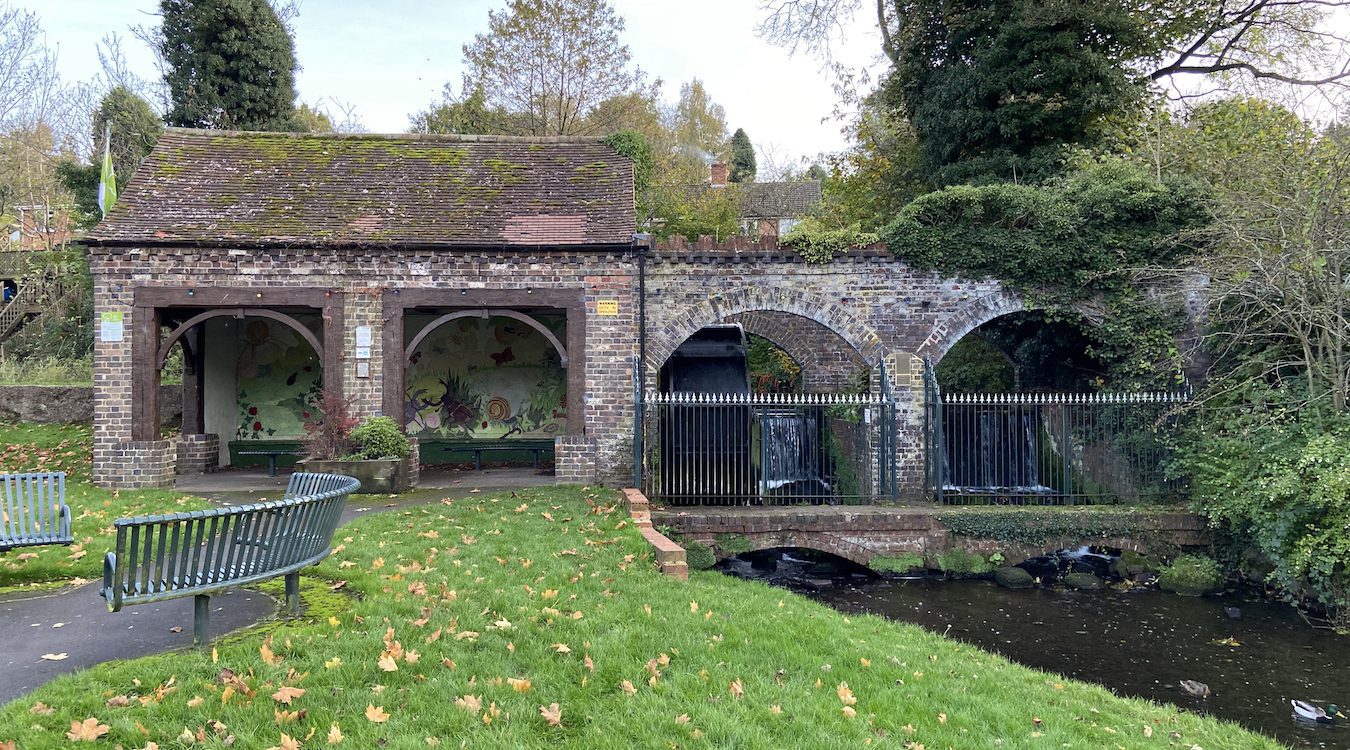 Broadwaters Park is a miniature green area located in Kidderminster on the grounds of a former mill, which was mostly demolished. A small part survived and now contains a new overshot waterwheel. The mill was one of many on the brook that flows through the area, which offers visitors a chance to explore its course as it journeys to the River Stour.

1240 – Broadwaters Mill had most likely existed before this date and was initially used for fulling, a process to clean, shrink and re-shape the cloth woven by the weaver’s loom. This rids the cloth of grease and other impurities leaving the finished product.

1746 – Broadwaters was converted into a corn mill by Thomas Smart of Halesowen.

1753 – The mill was made into an iron forge by John Homfray of Stourbridge.

1859 – A meeting of corn traders, millers, and farmers was held at the Lion Hotel, for the purpose of presenting Edwin Blundell of Broadwaters Mill with a silver tankard on the occasion of his leaving the neighbourhood to reside at Leominster [2].

1862 – Alexander Simpson and William Henry Blundell enter a business partnership called ‘Simpson and Blundell’ producing farinaceous foods for cattle at Broadwaters Mill in March [3]. The partnership didn’t last long and was dissolved in December, with Blundell retaining the right to continue running the business under the same name [4].

1891 – William Davies, a former miller at Broadwaters declares bankruptcy [6]. He was most likely the last miller.

1903 – A 5-year-old boy called Wilfred Lloyd was rescued after falling headfirst into Broadwaters Brook by a passing cyclist [7].

1932 – Thomas Henry Caldwell became entangled with the flywheel of an engine whilst engaged at Broadwaters Mill. He had already died from his injuries when found by a relative a few minutes later [8].

1937 – The mill is demolished by Kidderminster Town Council leaving the part now standing as a shelter [1].

1955 – This photo from the Francis Firth collection details the mill remains before the new waterwheel was installed.

2012 – Broadwaters Mill Park is awarded ‘Field in Trust’ status as part of the Diamond Jubilee Celebrations, which permanently protects the park as a recreational public open space [1].