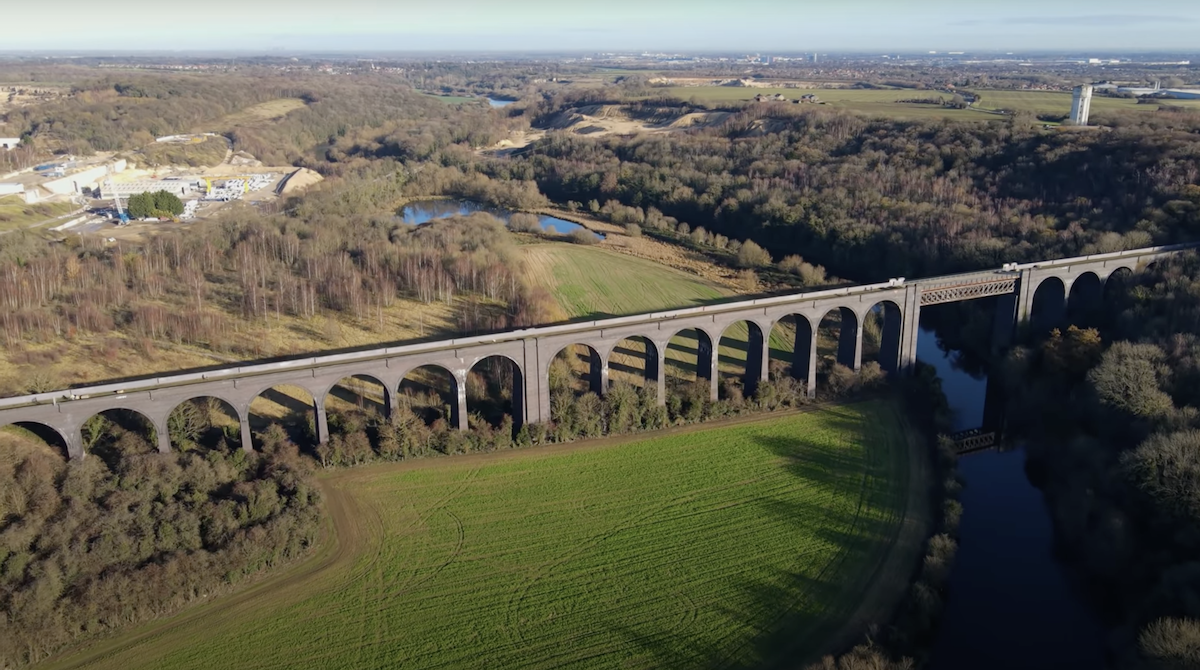 The closure of railways accelerated by the notorious ‘Beeching Axe’ in the 20th century left many railway viaducts without a purpose. These gigantic structures that had taken endless manpower, millions of bricks, countless tonnes of iron, and sadly many lives were now reminders of a fading past.

Regretfully, viaducts were demolished; however, thanks to the hard work and dedication of enthusiasts across the country, many of these wonderful structures have survived and re-opened as part of new walking and cycle pathways.

You cannot truly appreciate a viaduct until you have ventured over it, and that is why the following selection is set apart from the rest. The views over many accessible viaducts are breathtaking and offer visitors unique opportunities to take in the British landscape unconventionally.

Here is our selection of top 10 former railway viaducts that you can now walk or cycle over.

Nicknamed the ‘Iron Giant’, this wrought iron latticework viaduct once carried the Northern Railway Derbyshire Extension. It is the longest wrought iron viaduct in the UK and now only one of two surviving viaducts of this type. The choice of material and design was influenced by the landscape which was riddled with old mine shafts and tunnels. Wrought iron lattice was lighter and more flexible than conventional brick arches.

For its age, it is in remarkable condition and is largely unaltered since its construction. The viaduct recently completed a £1.7 million restoration project, which incorporated it into a new pathway for pedestrians and cyclists. Here is an exploration video by Ant at Trekking Exploration UK, who filmed the viaduct before restoration began.

This is the third-largest viaduct in Wales and curves across the Taf Fawr river with panoramic views of Merthyr Tydfil and the Taf Fawr Valley. It once carried the Brecon and Merthyr Railway and now is part of the Taff Trail, which is Route 8 of the National Cycle Network that runs between Cardiff and Brecon.

This goliath of a viaduct once carried the railways of Hull & Barnsley, Great Northern and Great Eastern for 57 years, which is a very short lifespan. It is huge with a 150 ft iron lattice girder crossing the River Don. The viaduct is now part of Route 62 of the National Cycle Network and the Trans Pennine Trail. There are ample opportunities for exploring the Don Valley beneath.

Here is an exploration video by Ant at Trekking Exploration UK, who filmed the viaduct along with the Cadeby Tunnel.

This viaduct once carried the Great North of Scotland Railway. It is now part of the Moray Coast Trail that runs from Findhorn to Forres. The Cullen Viaduct offers stunning views of Seatown, Cullen Harbour, and the North Sea. There are three smaller viaducts further east that are worth exploring.

This isolated viaduct once carried the Bala & Festiniog Railway. It crosses the Afon Prysor on the edge of a forest. The views of the Prysor Valley are stunning, and the remote location guarantees a peaceful visit; however, a fair trek is required from the nearest point of access, but it’s worth it.

Here is an exploration video by Ant at Trekking Exploration UK, who filmed the viaduct as part of his journey along the old railway trackbed.

This viaduct was incidentally mentioned in Dracula by Bram Stoker. It once carried the Scarborough & Whitby Railway over the River Esk and is now part of the Cinder Track, a wonderful pathway that hugs the Yorkshire Coast for much of its route. Larpool Viaduct, also known as the Esk Valley Viaduct, is a handsome structure, especially its arched piers.

This is one of the few open lattice girder viaducts left in Scotland and the only community-owned former railway bridge in the country. It crosses the River Tay and once carried the Inverness & Perth Junction Railway; however, the bridge now is part of Route 7 of the National Cycle Network. It is also part of a private road maintained by the community-owned Logierait Bridge Company so be wary of passing vehicles when crossing.

The decorative cast iron towers are reminiscent of gothic columns and are a notable feature of this viaduct.

The celebrated Victorian writer John Ruskin once criticised the railway that was carried by this viaduct blaming it for destroying a divine valley. It’s hard to imagine thinking unfavourably about the location today. The railway is gone, and its trackbed is part of the Monsal Trail, Route 680 on the National Cycle Network, one of the most beautiful routes in the Peak District.

The viaduct is next to the Headstone Tunnel. As you exit, you are thrust into the scenic valley with the River Wye underneath. If the weather is right, you can even spot salmon swimming along the currents.

Built to carry the Bristol & North Somerset Railway over the River Chew, this delightful viaduct offers visitors panoramic views of Pensford and the Chew Valley. A notable feature of this structure is the two smaller arches with thicker and panelled piers.

The viaduct is a source of local pride. The Chew Valley Brewery use the viaduct in its logo and the adjacent pub garden of The Rising Sun was crowned ‘Britain’s Best Beer Garden’ thanks to its stunning view of the viaduct.

The viaduct provides a wonderful vantage point for viewing the Pinch Beck Valley and was also used for filming an episode of Last of the Summer Wine.