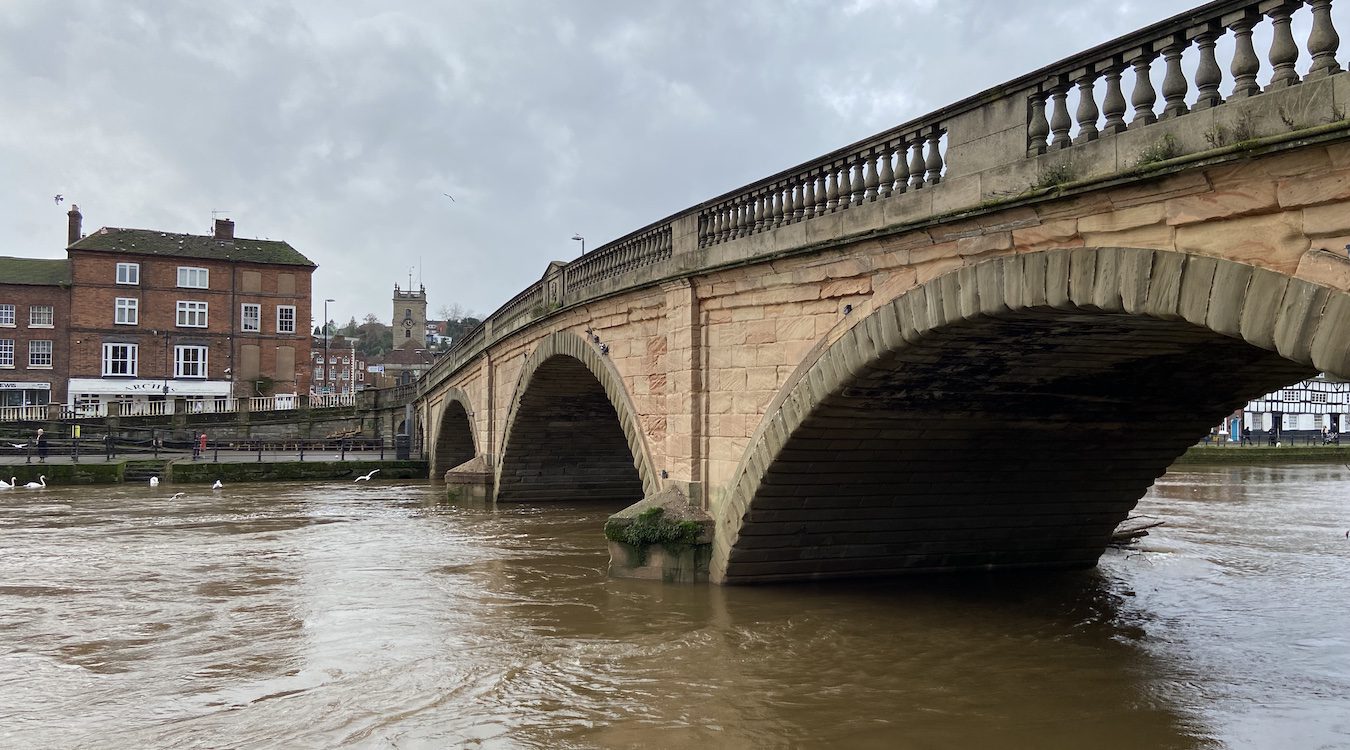 Bewdley Bridge is a handsome stone arched bridge designed by Thomas Telford. It is a notable example of Telford’s original skills as a mason before he went on the create many of his most famous works using cast iron. The bridge offers beautiful views of Bewdley’s preserved Georgian waterfront along the River Severn.

1795 – Severe storms during the winter cause multiple streams along the Welsh Marches to swell, which resulted in the Severn bursting its banks. This catastrophic flood swept away the original bridge that stood at Bewdley including several other crossings along the river. The residents of Bewdley applied for an Act of Parliament to raise money for a new bridge and hired Thomas Telford as the engineer. Telford was the county surveyor for Shropshire and was starting to use cast iron at the time, most notably for the Longdon-on-Tern Aqueduct and Buildwas Bridge.

1798 – The new three-arch bridge is completed by respected mason John Simpson of Shrewsbury according to Telford’s design. Stone is quarried at Arley and floated down the river four miles. The bridge was constructed rapidly in one season thanks to prolonged dry weather and the expertise of Simpson [1]. It is unclear why Telford opted for stone rather than extending his enthusiasm for cast iron. Perhaps he wanted his structure to complement the splendid Georgian waterfront of the town? The bridge cost £9,264 [2] (£1,217,000 in 2020).

1835 – A coach crosses the Bewdley Bridge when the horses gave a sudden jerk. The bolt connecting the horses with the fore wheels of a coach gave way, which overturned the vehicle with a tremendous crash. Seventeen passengers sustained injuries, thankfully there were no deaths [3].

1853 – Samuel Mole, labourer, was charged with having at Bewdley, a stolen a quantity of coal, which was the property of Cornelius Lister. The prosecutor proved that Mole assisted Lister to unload a boat of coal, for which he gave him 6d. Mole then asked Lister to let him stay on board with a man named Millward. Lister went to the boat the next morning and found he was missing about two carts of coal. Samuel Boraston was on Bewdley Bridge the previous night and saw Millward carrying coal from a boat to a barrow, and Mole wheeling it away and offering it for sale. A witness named proved that Mole offered to sell him the coal for a shilling [4].

1950 – Bewdley Bridge was first registered as a listing structure [10].

1952 – The Minister of Works refused to provide a grant to preserve the octagonal tollhouse at Bewdley Bridge despite an appeal to him by MP Gerald Nabarro [7].

1960 – A highway and bridges committee report states the tollhouse at Bewdley Bridge is to be demolished at a cost of £3,500 (£82,430 in 2020) and replaced with a commemorative plaque. The tollhouse is removed shortly after [8].

2020 – An ordnance from World War II is discovered in the river close to Bewdley Bridge. A 100 m cordon was enforced by the police, who recovered and disposed of the bomb [9].

The bridge is constructed of ashlar and cast iron. It consists of three arches over the river, two towpath arches on either side and 14 arches on the north-eastern bank extending about 50 metres to south-east

The balustrades on the river are made of stone, those on land are made of cast iron. The three main arches feature rusticated voussoir and triangular cutwaters with pyramidal caps, which pilasters rise to the moulded cornice below the balustrade which has bulbous balusters. The central pedimented tablets in each balustrade bear the arms of Bewdley [10].