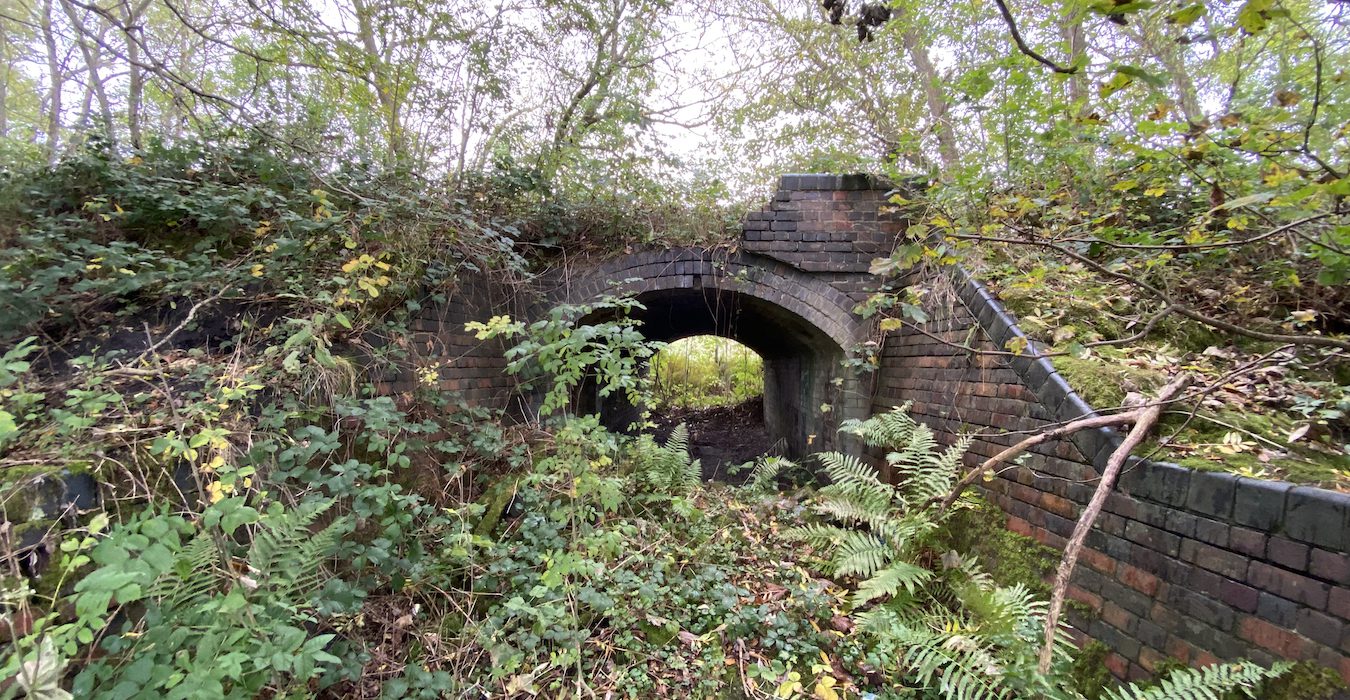 Baggeridge Country Park sits on what used to be Baggeridge Colliery, the last deep coal mine to close in the Black Country. Today, the park is an award-winning green area with a plethora of activities; however, this guide follows the remains of the colliery, the mineral railway that once served it, and the adjacent brickworks.

Start at the car park and head northeast past the gazebo, which marks the centre of the old colliery yard. Head towards the metal gates, you’ve just passed through what was the main entrance to the colliery from Fir Street, here is what it used to look like, and how it looks today. The building on the left was the colliery stores and building on the very right was the offices.

Head through the gates onto Brick Kiln Way, you will see a large chimney stack in the distance. This is Baggeridge Stack and is all that remains of the Baggeridge Brickworks, which arose due to its proximity to the colliery and the ready supply of shale combined with local Etruria Marl clay.

A closer inspection of the chimney reveals the former entry points, which are now bricked up.

This chimney will act as a marker, which will be visible for much of your walk. Head back the way you came down Brick Kiln Way to the metal gates on Fir Street. Continue straight down the street past the miniature railway on your right.

This area was the terminus of the Baggeridge branch line, which was part of the Pensnett Railway. This was a private network owned by the Earl of Dudley primarily to transport coal from the many pits that existed in the surrounding areas. Continue down the path, then you will see a bridge to your right, one of the few reminders of this lost railway.

Continue straight and you will see Bag Pool on your left.

At the junction follow the path up the hill past the picnic benches. You are now walking up the pit mounds. Photographs from the 1920s show this area as a flat field. Vast quantities of rock and spoil dug from the mine were dumped here during the life of the colliery. Before re-landscaping took place, this area was a large grey muddy mess.

Continuing heading east upwards and you will arrive at the top of one of the mounds where there is a spectacular view of the old brickworks chimney.

Follow the path upwards to the summit where you will find the Baggeridge Toposcope, which was constructed in 1994 using bricks from the old brickworks. Can you spot all the landmarks detailed on the toposcope?

Head south down the mound path, follow it around and you will arrive back on the main Baggeridge Circular Walk pathway. Continue south and take the left path at the fork. Follow this through the beautiful woodland and you will eventually arrive at another bridge that carried the Baggeridge line of the Pensnett Railway.

You can head up the embankment to the trackbed, which is fairly clear at this point of the trail.

Head back down under the bridge and take the right path at the fork, which will continue your journey along the Baggeridge Circular Walk. Follow the main path back to the car park. As you approach the team room, notice the colliery monuments to the left of the Challenge Academy entrance.

Two metal artworks depicting miners at work sit on the concrete base that once supported the head gear over the top of pit one. This upcast shaft was where the air left the mine after circulation and was also primarily used for supplying miners and emergency access. An original coal tub is located between the artworks, which was used to remove coal from the mine before modern conveyor belts were installed.

You may wish to extend your visit by walking the Easy Access Trail or Baggeridge Wood Walk, all trails are detailed below.

You also have the option of including the former colliery manager’s house in your trail, which is located at the end of Fir Street where it joins Gospel End Road. The house is situated right opposite the Fir Street junction and is now called ‘Gospel End House’.

Coal mining in this area had been supplying residents and local industry since medieval times. The use of steam engines and railways by the Earl of Dudley in the early 19th century helped the coal industry develop. During the same period, the construction of ironworks provided greater demand for coal and ironstone found in the area.

Most of the mines had closed by 1900 when the Earl of Dudley’s mining department sank the Baggeridge Colliery over the supposed boundary of the South Staffordshire Coalfield to develop a major deep colliery [1].

1902 – The second main winding shaft was sunk at a similar depth with a diameter of 17ft, and mining begins [3].

1906 – The Baggeridge branch line of the Pensnett Railway is completed up to the new colliery. It was agreed the Great Western Railway (GWR) would be responsible for construction because coal would traverse the line before being transferred to the GWR’s Wombourne line at Baggeridge Junction.

1910 – The Baggeridge branch line is featured in a written publication for the first time by T. R. Perkins. He wrote a two-part account of his visit to the Pensnett Railway, which included an observation of the Baggeridge branch heading up into the woods [2].

1912 – Baggeridge Colliery goes into full operation employing over 3,000 men and producing 12,000 tons of coal each week [4]. A meeting of the Iron & Steel Institute was held in a marquee at Round Oak Steel Works in Brierley Hill. Guests were invited to travel by train using the mineral railway to Baggeridge Colliery and occupied benches installed in cleaned-out coal wagons lined with fresh straw. Such occasions of the mineral railway carrying passengers were very rare [2].

1915 – 42 miners were summoned at Bilston for neglect of work after leaving work for two days, which hampered the business of manufacturers. The miners apologised and consent to nominal damages, which are donated to the Princes of Wales’ Fund [5].

1931 – 1.5 million tons of coal was raised in South Staffordshire, a third had been supplied by Baggeridge [3].

1944 – Baggeridge Brick Company Ltd. is registered to take over the business of brick making formerly carried out by the Baggeridge Colliery. The Earl of Dudley is one of six directors [6].

1947 – Baggeridge Colliery is nationalised under the Coal Industry Nationalisation Act 1946; ownership is transferred to the National Coal Board [7].

1960 – Sandwell Park Colliery in nearby West Bromwich closes, Baggeridge receives some of the 46 miners who were left after sealing the shaft [3].

2006 – Baggeridge Brick Company is sold to the world’s largest brickmaker Wienerberger for £89 million. The sale was triggered by rising gas prices and weak demand from the housing market. The brickworks employed 575 workers at the point of sale.

2012 – South Staffordshire Council approves the demolition of Baggeridge Brickworks. The land is repurposed for housing.

The following videos document two people who were connected to Baggeridge Colliery and are worth watching if you want to delve deeper into the history of the mine.

Erica J. Williams, daughter of
the last manager of Baggeridge