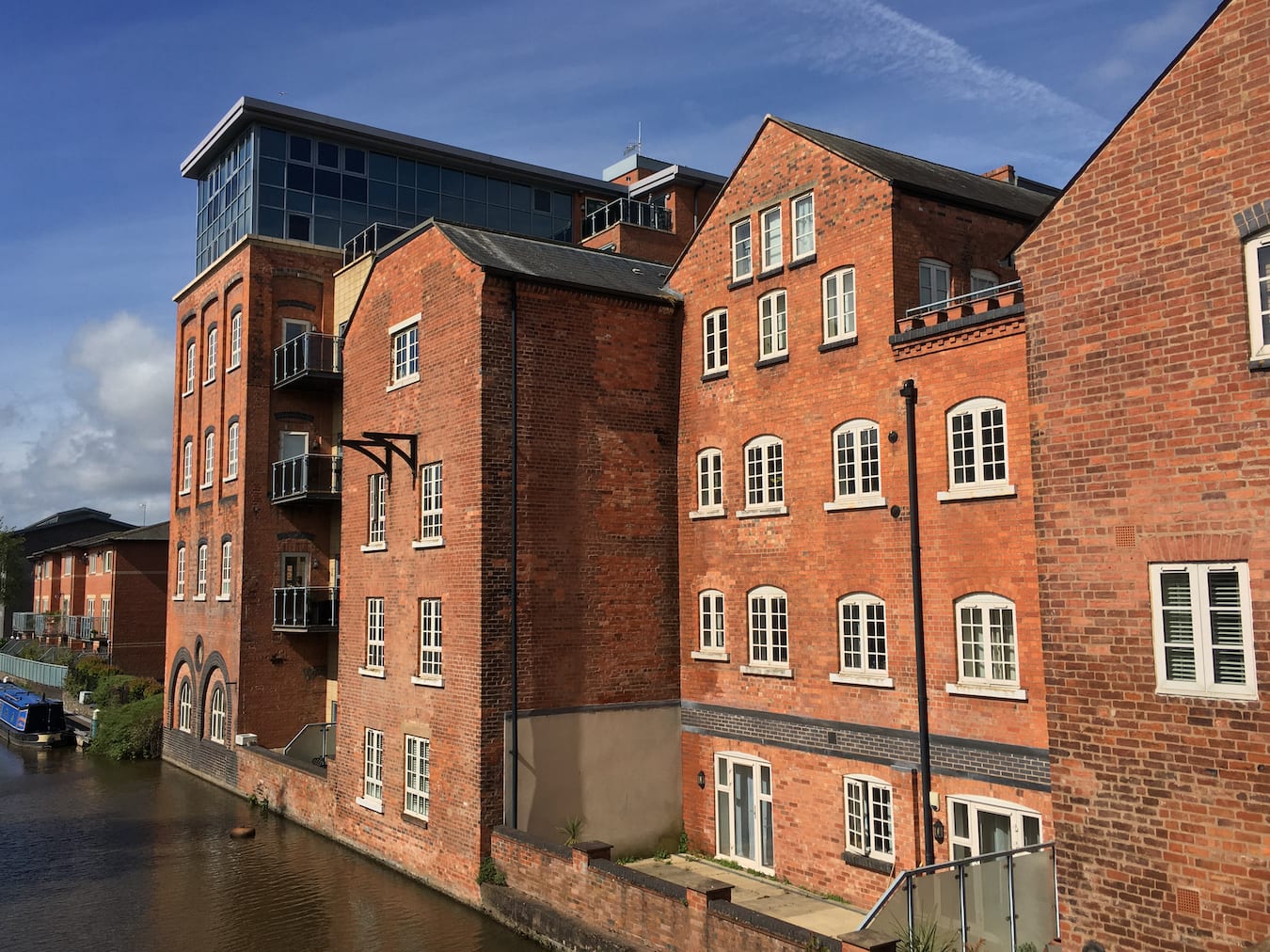 Albion Flour Mill once adorned the Worcester skyline as one of the most recognisable landmarks alongside the cathedral. A fire devastated the complex and the surviving buildings were developed into residential apartments. This site is a great example of industrial heritage that was retrofitted for modern use.

1815 – The Worcester & Birmingham Canal is completed, and Diglis Basin opens. The basin is connected to the River Severn via two barge locks.

1841 – Thomas Townshend (born Thomas Suffield), was recorded in the census living and working as an apprentice miller and baker in Winchcombe, Gloucestershire. His lineage can be traced back to Halesowen [3].

1843 – The first buildings of the City Flour Mill are constructed between Portland Street and the canal as it approaches the entrance of Diglis Basin [1].

1861 – Thomas was recorded as managing a flour mill at the age of 27 whilst residing in Dudley [3]. He then caught the attention of Mr Lucy whose son was at that time continuing the operation of the City Flour Mill and needed a practical man as a partner [4].

1865 – Thomas moved to Worcester after being accepted as a partner in the new firm known as ‘Lucy and Townshend’ [4].

1869 – Thomas is recorded as “Thomas Suffield Townshend of Albion Steam Flour Mill, Worcester” when he was appointed executor of his cousins will [3]. By this point, Mr Lucy senior had been dead for many years leaving Thomas to continue running the mill under his new company “T S Townshend & Sons Limited” [4], which probably led to the mill be renamed as “Albion Mill”.

1882 – Thomas is appointed Mayor of Worcester after holding a series of public offices including Councillor, Sheriff, and Alderman.

1890 – Thomas suddenly dies from apparent heart problems induced by anxiety as he hastily travelled to Guest Hospital, Dudley to visit an employee who had been injured that day [4]. He was 58 years old, and control of the mill is passed to his sons Frank, Percy, and Conway [3].

1891 – The mill employees have their annual company outing by joining the excursions of the men from the Worcester Iron Foundry to Bournemouth [6].

1898-1901 – The mill submitted eight planning applications for additions such as a new flour and sack room, storeroom, grain store and enclosure [7].

1960 – Albion Mills is sold to the Royal Worcester Porcelain Works. At the time of sale, the covered floor area is reported as 60,000 square foot containing silos with a storage capacity of 2,300 tons. The overall site has a total area of over 4.5 acres and the sale included plant machinery, the barge intake elevator, sack hoists, man elevators, weight machines and steam raising plant [5].

Five months later, a fire devastates the mill damaging five storeys of the main tower and surrounding buildings. Forty families are evacuated from adjacent homes and the Worcester skyline glows red and orange from the flames. Fire chiefs at the time describe the blaze as “the largest and most potentially dangerous fire in Worcestershire since the war”. After the fire, the main mill tower is given a new roof and stands at a reduced height of four storeys [2].

1962 – T. S. Townshend & Sons Limited gives notice of insolvency and one Arthur Thomas Brewer of Worcester is appointed as liquidator [9].

2003 – An archaeological evaluation report and historic building assessment are carried out on the mill [1].

2008 – The mill complex is renovated and converted into 38 apartments.